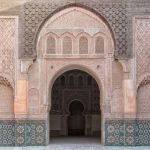 In Moroccan variety we say “Merhbabikom” which means Welcome. Morocco is a gateway to Africa, and a country of dizzying diversity. Here you’ll find epic mountain ranges, ancient cities, sweeping deserts – and warm hospitality. If you get in Morocco, you will see Welcome to Morocco written in many places along the kingdom. Marrakesh Journeys will get you to the heart of Morocco, with amazing travel experiences and the best planning advice.
Marrakesh Journeys is your passport to the most relevant, up-to-date advice on what to see and skip, and what hidden discoveries await you. Explore the medina and tanneries in Fez, hop between kasbahs and oases in the Draa Valley, or catch a wave at Taghazout; all with your trusted travel companion. Get to the heart of Morocco and begin your journey now!

Plan your Journey with us (here)

In its nine centuries of life Marrakesh alternates moments of splendor and glory with long years of obscurity. It was built and destroyed more than once, are few cities in the world whose history is so closely tied plundered and embellished, venerated and punished. Three to that of their country, to the point of even bearing the same name. Marrakesh still today bears witness to the past splendor of its troubled and fascinating history and is to all effects a museum-city, with its striking mosques, minarets, splendid palaces, gardens which seem miraculously to spring from a void in the dry thirsty earth, where they were created thanks to the genius and fantasy of its builders.
There is something both thrilling and delightful in the ancient lanes, the crooks and crannies, the shops of the souk where everything can be had; but there is also something overwhelming in the feeling of infinity of the landscapes stretching back towards the mountains of the High Atlas, the vastness of this mythical square (Place Djemaa el-Fna), the spectacular geometry of its walls.
Marrakesh was once the capital of all Morocco, an imperial city on a par with Fez, Meknès and Rabat. It was and is the capital of the South: with its burning sunsets and red and pink houses, an infinite variety of aromas and the perfumes of spices and acute and sweet essences; the intoxicating scents of roses and jasmine; the spell cast by the songs and words of the craftsmen and the snake charmers; the sound of water and the milling crowds in the markets; the majestic silence of its Berber and Arab art treasures; the incredible snows on the mountain peaks overlooking the city.
It sprang up as a great Berber metropolis, a symbol of the pride of this nomad race, accustomed to a hard life bounded by the sea of the Sahara sands and the friendless rugged stones of the Atlas mountain chain and its snow-covered peaks, and that is what it will always be. No one – neither the Phoenicians nor the Romans, the Byzantines nor the Vandals – ever succeeded in completely dominating this pride. And not even the Arabs when they began their conquests in the seventh century.
Today Marrakesh is a city with over 500,000 inhabitants, the third in Morocco, after Rabat and Casablanca, the principal city of a province which numbers a population of a over 1,260,000 souls. beyond the High Atlas and for the routes which lead to Agadir, Casablanca, Fez and Meknès. It is, in other words, an ideal bridge which joins the north of Morocco to the south. The principal activity consists of crafts (leather, copper, textiles, carpets), in which 58.5% of the inhabitants are employed. But Marrakesh, in the seventies and eighties and now more than ever, thanks to its systems of hotels which cater to all pockets and range from the simplest to the most luxurious with splendid swimming pools, casino and perfect 18-hole golf courses, has consolidated its role as capital of Moroccan tourism, competing, perhaps, only with Agadir and its blue sea.
The almost millenary history of Marrakesh has always been closely related to that of the principal Berber tribes and their encounter-clash with Islam: the Almoravids, the Almohads, the Merinids, the Saadians, the Alaouites. Uncertainty still surrounds the origins of what was to become the capital of the Berber empire and its culture.

Check here our best tour trips all over Morocco.

The Merzouga Desert (Erg Chebbi)
The Merzouga Desert is located 600 km from Marrakech in eastern Morocco, on the border with Algeria. It is a desert that best fits the collective imagination. For us French, the desert consists only of sand dunes as far as the eye can see. The desert of Merzouga is just that: orange dunes stretching for several kilometers.

The Moroccans take advantage of this magnificent landscape, turning it into a tourist attraction. Dozens of camel caravans travel to the dunes every day, as well as ATVs and other buggies (4×4 vehicles without doors). 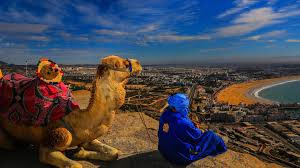 Discover Morocco with us, Marrakech Journeys welcomes you in Morocco