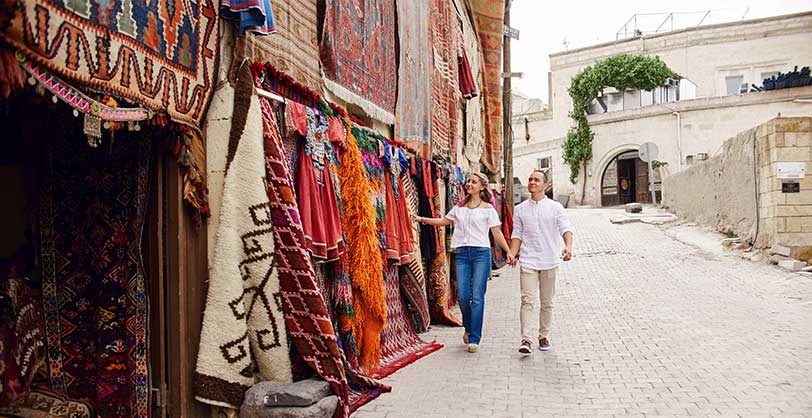 Is it safe to travel to Morocco?

Indeed, Morocco is often reputed for its safety and the friendliness of its people. Moroccans are among the most peaceful nations in Africa and even worldwide. Considering that the pandemic no longer threatens us or stops us from traveling, Morocco should be a good holiday destination.

Among all the North African and Arab countries in the past 20 years or so, Morocco has been one of the most peaceful lands, with no major wars or extremely violent revolts. Aside from a few incidents that happened due to the actions of some extremists, Morocco is as safe as it can be.

So, let’s answer the question of “is it safe to travel to Morocco?” as best as possible.

Is Morocco Safe for Tourists?

Generally speaking, Morocco is a safe destination for travelers and tourists. 99% of the time, you’ll face no major safety concerns in Morocco. According to many scoring metrics, Morocco ranks among the safest countries you can visit; Morocco is the 24th safest country according to Global Finance. So, technically, Morocco is a lot safer than the U.S., which ranks the 77th.

Morocco is a touristic country, not only because it has beautiful landscapes and a rich cultural heritage, but also because it’s equipped to host tourists. The tourism industry of Morocco is one of the most well-regulated and well-equipped financial sectors, making Morocco ready to receive travelers and keep them safe.

Is Morocco Safe for Travel as a Family?

Moroccan culture is family-oriented; families with kids are regarded with high respect and honor. While traveling alone might be safe in Morocco, traveling as a family with kids is much more secure. As a father or a mother, Moroccans will make sure you’ll be met with a warm heart and treated respectfully.

When traveling to Morocco with little kids, the only concern you should keep in mind is their gut safety. The water and food might impact your little ones in a way that might drive concern. That’s why you should take some Over the Counter Medications and first-aid with you in case something happens.

Is Morocco Safe for Expatriates and Students?

If you’re thinking about moving out to Morocco, it might actually be a good idea. Living in Morocco is super affordable, especially if you compare it to Western Countries.

Morocco is one of the most culturally diverse societies in the world, especially in the big cities. The major Moroccan cities host people from all over the world, namely African and European countries. Racism is the least problem to concern you in Morocco. Discrimination because of race is rare in Morocco. While people might not be open to a conversation or act weirdly when you interact with them, it’s probably just because you’re a foreigner, not because of your race or skin color.

As long as you live in a nice neighborhood, nothing will harm you if you live in Morocco. As a student, you’ll find that many other non-Moroccans, mainly from Arab and African countries, also go to your school or university.

Is Morocco Safe for Solo Travelers?

Traveling solo in Morocco shouldn’t be a problem. While it might feel a little bit dangerous and lonely at times, that shouldn’t be a big of an issue if you’ve already got used to traveling alone.

You should be fine as long as you keep away from the shady spots where there aren’t many people. Make sure to stay within the vicinity of public institutions, markets, and major roads, and stay away from poor neighborhoods where you might encounter local criminals.

Having a travel guide should prevent anything astray happen to you. Traveling with local guides will allow you to spend less time and energy thinking about whether you should go somewhere or not. The guide will show you around and take you to the interesting spots where nothing wrong happens most of the time.

Is Morocco Safe for Female Travelers?

Traveling as a female in Morocco can be a little bit uncomfortable if you’re young and wear revealing clothes. While nothing serious happens 99% of the time if you get offended by cat-calling, that might be an issue. Most of the time, you’ll only receive compliments about your looks that can be considered innocent. Young guys would let you know that you look beautiful or sexy if they got the chance.

You should be fine as long as you ignore the cat-calling and refuse to interact respectfully when someone approaches you.

You should also wear clothes that cover as much skin as possible when you’re not in the tourist areas in the big cities like Tangier, Marrakech, Rabat, Casablanca, Essaouira, Fez, and Agadir. Many Moroccans in the small towns and rural areas would consider partial public nudity disrespectful.

Generally speaking, you should be able to wear whatever you want as long as you feel comfortable in it. But, that doesn’t mean you shouldn’t use your common sense to determine whether your wardrobe is appropriate for the occasion or not.

Also, if your skin is very pale, you might actually want to cover it from sunburns, especially in the desert. Baggy clothes are the best go-to when it’s super hot in Morocco.

Not only that Moroccan cuisine is safe, but it’s actually quite healthy. Moroccans are known for their rich culinary habits that are closely tied with nature and natural products. Most traditional Moroccans enjoy a diet that has a few processed foods. As long as you keep away from foods that trigger allergic reactions in you, you should be fine eating Moroccan foods.

As for the water, you might want to avoid tap water as much as possible because it might take some time to get used to it and adapt to its bacteria. You’ll have no issue getting hold of high-quality mineral water wherever you go in Morocco. You can also buy a water filter if you’re eco-friendly and hate to waste so much plastic from buying water bottles constantly.

Is there Good Healthcare in Morocco?

Jokes aside! Private hospitals, on the other hand, are actually good. While it might be a little bit costly, it’s not like Morocco is the U.S. when it comes to healthcare fees. If you’re actually seeking treatment for a serious illness, you can actually go to one of Morocco’s best healthcare institutions (private practice) to seek help. You’ll end up saving some money if your country doesn’t have free healthcare or it’s costly.

Is It Safe to Backpack in Morocco?

Backpackers and bikers are among the most recurring types of tourists that visit Morocco. There are plenty of hiking destinations in Morocco. From the soaring heights of the Atlas Mountains to the vast Sahara desert and the beautiful waterfalls, valleys, and coasts, Morocco is impressive when it comes to its natural landscapes.

As a backpacker, you’ll spend a lot of time in remote areas, which might be a little bit dangerous. It’s dangerous in remote areas, not necessarily because of the people. On the contrary, people in the rural areas of Morocco are actually quite friendly and agreeable. The issue comes from a lack of telephone service, which might be necessary if you happen to injure yourself or something.

What Are the Safest Spots in Morocco?

Pretty much the whole of Morocco is relatively safe, but some places are more than others. To put it simply, you have to keep away from shady neighborhoods in the big cities. You’ll be a lot safer and more comfortable when you’re in open spaces where people are moving around.

If you stick to the touristic areas of the big cities like Marrakech, Fez, and Casablanca, you’ll rarely face any issues because the police are always watching around. Aside from petty crimes and minor scams, you won’t deal with any serious situation in Morocco most of the time.

Plan your journey with us on Zoom for Morocco’s safest and most comfortable travel experience.

What Are the Common Crimes you Encounter in Morocco?

Petty crimes and scams are the usual packages you have to deal with when you’re in Morocco. You have to watch out for pickpockets in crowded areas because you don’t know what’s going to happen. It’s always good to have a secure bag that you attach to your waist and keep all your fancy things out of sight. Just think about walking around the most dangerous area in your home city/town with jewelry and a handbag that has your $1,000 phone; it’s not a good idea. Well, it’s the same in Morocco. While it’s super safe at some places, other spots are known for their criminal reputation.

The best thing you can do is to travel with an authorized travel agency with professional local guides.

Is Public Transportation Safe in Morocco?

Public transportation is not that bad in Morocco. In many parts of the country, it’s actually high-quality and very comfortable. If you can afford to hire a private car service, you’ll be able to travel very comfortably. You should travel with a travel agency that has private drivers/guides if you want to hit two birds with one stone.

However, the situation is a little bit different if you choose to travel in crowded public transportation such as a city bus. It has been reported that multiple female travelers experienced groping and other forms of minor sexual harassment in crowded city buses. So, if you’re moving around in Casablanca or any other big Moroccan city, you might want to go by taxi or the tramway if it’s available. Trams are only available in Rabat and Casablanca currently.

What Should I Avoid in Morocco?

As far as Moroccan culture is concerned, it’s actually very tolerant and open-minded. But, you should always keep in mind that you’re in a country where the predominant majority is Muslim and somewhat conservative on issues of sex, religion, politics, and social values. While Morocco is taking a progressive turn by the turn of each new decade, there are some taboos that you shouldn’t invoke.

As long as you respect the culture around you, you’ll be fine. Things that might trigger Moroccans can be harassing their girls, drinking in public, eating or smoking in public when it’s Ramadan (the month when Muslims fast from sunrise to sunset), and wearing disrespectful clothes.

You should also avoid disrespecting the religious views of Moroccans or their politics to avoid unnecessary backlash. You can talk about anything you want as long as you come from a sincere place.

Just like any other country, Morocco is both safe and not safe. But in the case of Morocco, the situation is a lot safer. As we’ve already said, according to many stats, Morocco ranks among the safest countries in the world as of 2022. Moroccan people are friendly and peaceful, the tourism industry is well-equipped, and security for tourists is a priority for the government.

As long as you keep yourself from trouble and shady people, you’ll manage to get by in Morocco as if it was your neighborhood.

Therefore, the answer is YES. Morocco is super safe. So, what are you waiting for? Head to our Morocco tour catalog and pick up a tour that suits you the most.

And if you need to learn more, check out our all-encompassing guide to Morocco.

Contact us if you need anything; we’re always happy to answer everyone!