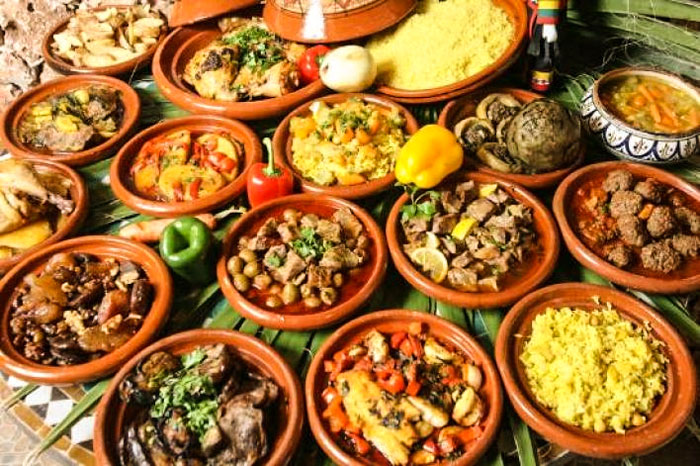 Moroccan cuisine is internationally well-regarded for its richness, which is reflective of its surrounding culture. A foodie would never get tired of trying the various cuisine choices that Morocco offers. From meals that were passed down from the ancient past to modern innovations, Moroccan cuisine is definitely worth it.

Moroccan cuisine is relatively healthier than many cuisines worldwide aside from its deliciousness and richness of ingredients and flavors. Moroccan cuisine is technically considered a Mediterranean diet, relying heavily on fresh vegetables, olive oil, and seafood. If you’re looking for some healthy choices to incorporate, you might consider adding some Moroccan cuisine standards to your diet.

So, let’s explore what our foodie’s guide to Moroccan cuisine has for you!

Dishes like couscous were the standard in the region before the Arabs came with the tagine, which is now considered the most iconic Moroccan meal.

It should be noted that 99% of Moroccans only eat halal food, which means no pork and the cattle should only be slaughtered after dedicating it to God. Ever since Islam became the dominant religion in Morocco, the locals converted to eating halal.

As for alcohol, Morocco is one of the countries that were occupied by the Roman Empire, which means growing grapes for wine was a huge thing like any other place in the Mediterranean. Although the situation about alcohol is controversial, wine is undeniably one.

Moroccan diet heavily relies on local vegetables, homemade wheat bread, meat, rich seasoning, and dry fruit. Legumes are also very big in Morocco; green legumes are often used in couscous and tagine. And since Morocco has a lot of costs, seafood is abundantly available; you can find all types of seafood in local markets and restaurants.

The standard dessert In Morocco always includes fresh, seasonal fruits instead of sweets and similar desserts.

Since the introduction of Arab cuisine to the Moroccan scene in the middle ages, spices have been a standard ever since. Moroccans like to include turmeric, ginger, paprika, coriander, and saffron in almost every meal.

In the old days with the Amazighs, the diet was mainly composed of homegrown vegetables and legumes. Since there were no fridges, they used to preserve meat by drying it in the sun after putting a lot of salt on it. Couscous with salty, dry meat with fresh pumpkin and chickpeas is still one of the main meals on a weekly basis in Morocco; they celebrate the weekly holiday (Friday) by preparing couscous for lunch.

When it comes to sweet meals, Moroccans often add ginger to add that punchy flavor. They also like to mix salty with sweet, which is the case with meals like pastilla and chicken tagine with raisins.

Moroccans love to drink their tea with other herbs, especially mint. Mint tea is probably the number one drink in Morocco.

The Components of a Meal in Moroccan Cuisine

A typical meal in Morocco is usually composed of a main dish, a side dish(s), and a dessert. Salads and juice usually accompany a main dish like tagine. Orange juice is very common in Morocco. As for dessert, you’ll probably expect to find some sort of seasonal fruit in addition to bananas and apples. When it’s summertime, watermelons tend to dominate the scene. And during fall, grapes are the usual go-to.

This list includes some of the main dishes that you’re very likely to encounter in a trip to Morocco if you’re interested in local cuisine choices as opposed to international choices.

Couscous can be considered as some sort of pasta; it’s technically pasta. It’s served with a huge variety of vegetables. As for meat, it’s usually cooked with whatever meat is available: chicken, beef, mutton, lamb, or goat.

It’s served in a beautiful floral shape that makes it quite appealing to the eyes.

Tagine is probably the most common Moroccan meal, and it’s also the most beloved meal. Tagine is actually one of the meals mentioned in the Arabian Nights story (One Thousand and One Night). Made with all sorts of vegetables, and legumes, in addition to meat, the Tagine is all one needs to have a balanced meal.

Tangia is the Moroccan version of steak. The main star of the show is beef and seasoning. Found abundantly in Marrakech, Tangia is one of those meals that you shouldn’t eat too much if you’re not willing to find a way to burn those calories.

Harira, also known as Moroccan soup, shares many similarities with the above-mentioned entries, namely the richness of natural ingredients. Harira is usually served a little bit thicker than most Western soups and you can also cook it with meat chops.

Kebab is one of the culinary influences Morocco received from the Ottoman Empire. The Empire never got to invade Morocco, but their culinary habits did. Well, at least the love of kebab did. After all, who can say no to the smell of kebab, especially when the meat is seasoned very well?

Grilled chicken is one of those meals you just can’t resist in Moroccan restaurants because of how beautiful they display it. Looking at those full chickens slowly turn around as they get cooked by the slow fire is tempting to the eyes.

Most Popular Side Dishes

The Zaalouk salad is a Moroccan cuisine staple that everyone loves. Prepared mainly from eggplants, Zaalouk is the favorite side dish to accompany the main dish.

Typical Moroccan salad is made using tomatoes, onions, roasted peppers, and cucumber with vinegar, olive oil, salt, and pepper. Moroccan salad is often the side dish of choice for the majority of Moroccans. Many people like to make it fancier by adding boiled potatoes, and other ingredients.

Carrot salad with parsley and garlic is often an accompanying meal that you find beside a tagine in a typical Moroccan lunch.

Below are the most common drinks that Moroccans enjoy.

Why have tea alone when you can add fresh mint to it and make it taste and smell way better than served plain? That’s how many Moroccans think, so they add mint to their tea.

Also known as fermented milk because the West has no idea what it is, leben is one of the forms that milk takes after it’s spoiled and all the fat is extracted from it. Moroccans like to enjoy their couscous with Leben.

Seasonal fruits are always the go-to for a good Moroccan dessert. Nature always likes to keep itself diversified when it comes to the time fruits become ripe, and so is Moroccan desserts. When it’s grape time, Moroccans serve grapes, and when it’s watermelon time, they serve watermelons.

You often find yogurt served as a dessert but not quite as often as fruits.

Flan is also a very popular dessert in Morocco.

Street food comes in all shapes and flavors in Morocco, but when it comes to cultural significance, these three choices are the go-to.

The stalls that serve chickpeas with cummin usually serve snails too. If you’re not a French person, eating snails might be a weird thing to you, but they’re actually quite delicious with the appropriate seasoning.

If you’re looking for a big jug of calories, healthy fatty acids, and proteins, then you should order zaa-zaa. It’s basically a big jug of avocado smoothie, nuts, crackers, fresh fruit,  dried fruits, and chocolate if you want.

These are some of the snacks that you will always encounter in Morocco.

Maaqouda is the Moroccan version of mashed potatoes. Only these potatoes come in disks with a crunchy outer layer, making them a good snack to get while taking a walk.

Briwat are either served salty or sweet. It’s basically a triangular-shaped pastry filled with something interesting on the inside. It could be ground meat or cheese, or it could be almond dough.

While not the highliest recommendation when it comes to a healthy food choice, churros are very popular in Morocco.

Who doesn’t like potato chips? Moroccans certainly love them.

The same goes for pastries! Who doesn’t like croissants? Unless a doctor forbade you from getting near to them, they’re always good wherever you go.

A typical Moroccan lunch usually includes a main dish such as the tagine and a couple of side dishes, including olives. Moroccans usually eat a lot of olives. Juice may or may not accompany the main dish. During special occasions, Moroccans may serve two main dishes one by one, before they end the meal with dessert, which is usually seasonal fruit.

However, a Moroccan lunch has to be couscous when it’s Friday. 99% of the time, a Moroccan family will serve couscous during the Friday lunch.

A typical Moroccan dinner can either be something light like a little bowl of harira, or it can take the same pattern as a typical lunch. Moroccans often serve the same food they eat for lunch at dinner.

The Most Popular Moroccan Chefs

Moha Fedal is considered the ambassador of Moroccan cuisine to the world. His restaurant, Dar Moha, is one of the best spots you can visit to taste Moroccan cuisine at its best when you’re in the medina of Marrakech.

Chef Moha gained a lot of popularity after he became a judge in the Moroccan version of Master Chef.

Choumicha Chafai is the face of Moroccan cuisine as far as a whole generation of Moroccans are concerned. One of her shows on national TV did a huge service to Moroccan cuisine by showcasing each region’s best culinary habits. Choumicha is the most recognizable chef in Morocco, thanks to her strong media presence and delightful personality.