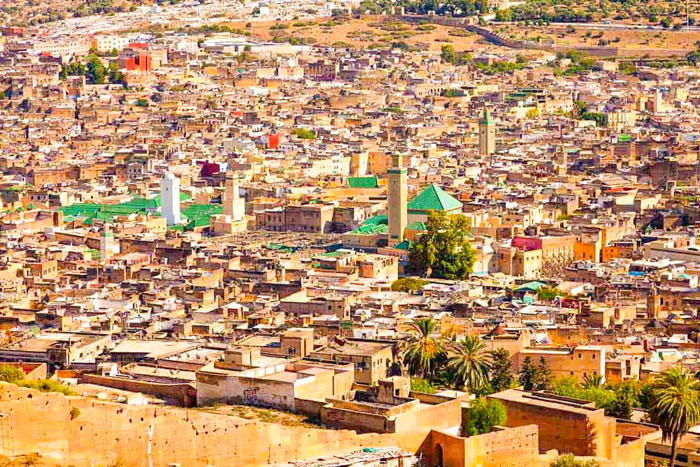 This cultural city is one of the most fascinating royal cities in Morocco. With its Marini tombs and ruined necropolis, Fez reveals itself both outside and inside the city walls.

Fez can be visited all year round, but spring and autumn are the most pleasant seasons.

The Bâb Boujlud Gate, nicknamed the ‘Blue Gate’, is the simplest entrance to the Fez medina and is a UNESCO World Heritage Site. It is, therefore, no surprise that the main entrance is renowned for its beauty. This entrance dated back to the 12th century and was restored in 1913. It is covered with blue enamel on the outside and green enamel on the inside.

Located in the heart of the medina of Fez el-Bali. Zawiya Moulay Idriss II is a holy site for Muslims in Fez.

The ban on non-Muslims entering the religious site dates back to a law enacted by Marshal Rorty in 1914. Until then, anyone could visit the shrine, but the behavior of soldiers going in muddy boots led to this restriction.

The entrance to the memorial is crowded. The mosaics on the walls and ceiling are magnificent.

The term ‘artisan’ is used a lot these days, but in Fez it really means something. In the textile market in the medina, a man makes colorful bedspreads, dresses, and shawls from silk and cactus threads on a large wooden loom. The medina is said to be the largest car-free space in the world, and goods are loaded onto donkeys and mules, which are warned not to move by shouting ‘Barak’.

Women gather in front of the Karaouin Mosque, the second largest and one of the oldest mosques in Morocco, built in the 8th century by Fatima al-Fihri, the daughter of a wealthy Tunisian family. It is closed to non-Muslims, but visitors can see its stunning interior, including two chandeliers inspired by Andalusian church bells. Its madrasa (chapel) is often regarded as one of the oldest continuously operating universities in the world.

For a taste of medieval Morocco, head to the tannery district, where barefooted workers pile into pits to dye hides. The dyes vary from day to day, but first, the hides are soaked in a mixture of cow urine and quicklime (to remove hair marks), then sour pigeon dung. There are three in town, but the CHOUARA tannery, built in the 11th century, is the biggest, and you are taken out onto a terrace where you are surrounded by leather goods, given a sprig of mint to sniff, and can see the burning holes. Be prepared to have to bargain a little more.

The dyed hides lie on the surrounding hillsides to dry in the sun. Much of it is destined for making babouches (colorful slippers), which are becoming increasingly popular in the medina.

The beautiful landscape of Fez

Morocco’s second-largest city is located in a valley between the Rif and Middle Atlas Mountains. From rooftops and hilltops, the minarets with their satellite dishes, the lush Junan Sbil gardens, the more than 13,000 white tombs in the Jewish Quarter, and the open streets of the Parisian-style New Town tell us that the passage of time has left its mark on Fez, without touching the medieval heart of the city.

Along the ‘Talaa Kebira’ in the medina, artisans make many embossed souvenirs, colorful leather goods, ornate brass and copperware, and handmade ceramics in Fez’s distinctive cobalt blue. While intoxicated by the color and pattern combinations (some of the 45 patterns are named after tribes), you’ll be regularly served sweet mint tea, which might get your head and your wallet if you don’t haggle.

The Boujeroude Garden (now Jnan Sbil), linking Fes el Jida and Fes el Bali, was opened to the public in the 19th century on the orders of Sultan Moulay Hassan. After a day spent in the hustle and bustle of the medina, the 18.5 ha of symmetrical flowerbeds, weeping willows, palms, and lemon trees will give you a much-needed rest, and since 2010, a four-year restoration has been undertaken to install a water wheel, fed by the Oued Fez river.

Built-in the 17th century, the Fez el-Zid Palace can be visited from the outside during the stay of King Mohammed VI. Behind the beautiful gates (with locks), there are large gardens, ceiling paintings, mosaics, a small mosque, and a madrasa.

The golden doors of the Royal Palace are particularly worth seeing.

There are hundreds of bakers in the medina, baking ‘hobs’ inside or outside large open ovens and supplying local restaurants and shops.

Look out for the neighborhood ladies who bring their own homemade dough covered with cloth to bake.

Camel’s heads hang from the butchers in the medina, leaving no doubt as to the origin of the meat.

The camel’s mouth is often adorned with fresh parsley as if it had met its end as a snack.

A thick hump is considered the best cut. Try the Croc Café (owner Mike Richardson was a senior waiter at the Wolseley and Ivy Hotels in London), where the camel burger is famous.

Overlooks the city and the countryside.

The tombs have fine carvings, but most visitors come for the tranquillity and the very green landscape, contrary to the popular image of Morocco as a desert. A visit to the Friday morning bird market at Bab Guiseh is also a good starting point for the climb.

A day trip to Meknes, another imperial city 44 km from Fez, includes a visit to Volubilis, an impressive Roman ruin.

During the visit, you can see the well-preserved mosaics and the main promenade. Built-in the 1st century AD, the city developed largely under Roman rule, but eventually fell into the hands of local tribes and became the residence of Idris ibn Abdallah, founder of the Moroccan state, in the 8th century. After moving to Fez, the corrupt sultan Moulay Ismail looted most of the magnificent marble and stone buildings and built Meknes.