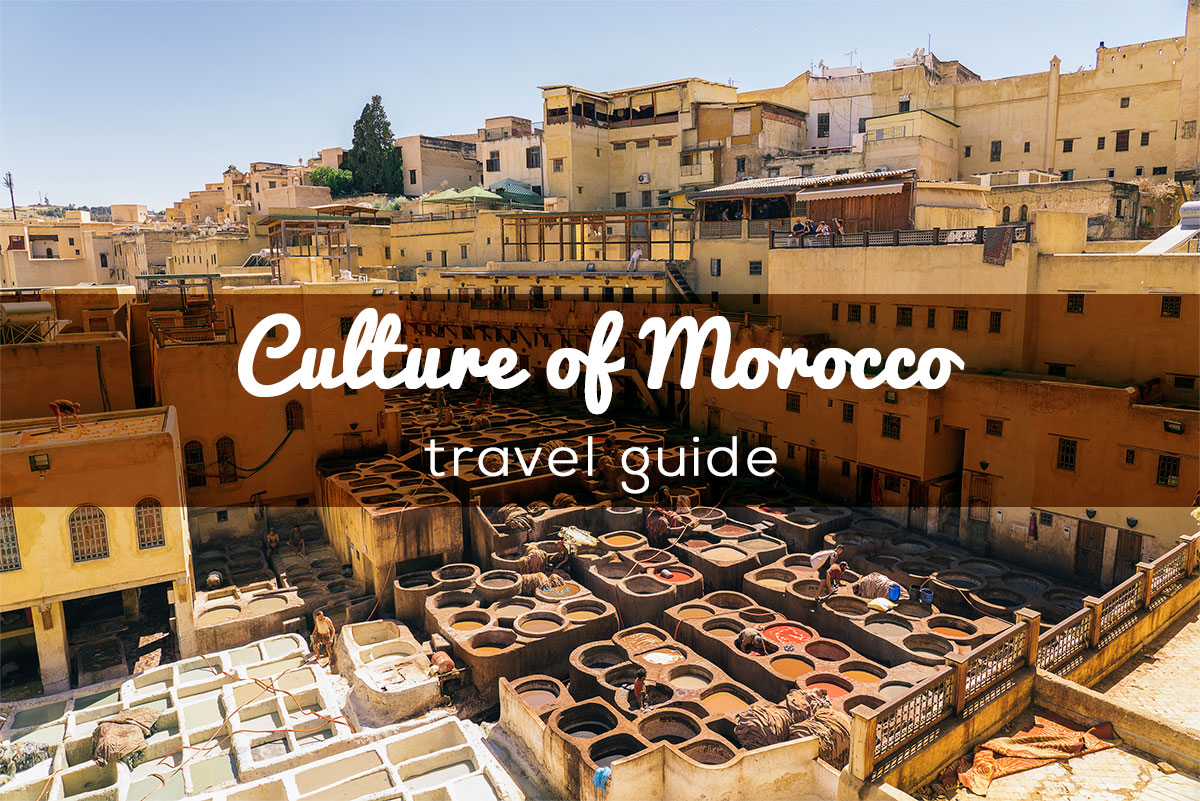 Morocco is a fantastic travel destination because of its stunning landscapes, energetic towns, rich culture, delectable cuisine, and hospitable residents. It’s advisable to raise up little of your awareness of culture before you arrive because it’s also the home to many distinctive traditions of Moroccan and etiquette guidelines. You’ll not only have a much richer experience as a result, but the inhabitants will also appreciate your attempt to respect their traditions. In this article, you will know the essentials about the culture of Morocco and etiquette before visiting, from what to wear to how to dine.

Culture of Morocco, quick travel guide before you visit Morocco

In the culture of Morocco, salutations are more formal but still quite cordial and friendly. Even in big gatherings, Moroccans will greet everyone with “salaam alykum” or Hi/hello (in English) and inquire about their health as well as the welfare of their families and children. The norm for greetings between man to man and woman to woman is a handshake or two “air kisses” on each cheek, however, this is never done when people of different sexes aren’t close friends.

A man waits for a woman to start shaking hands as they are introducing themselves to avoid embarrassment if the girl isn’t shaking hands with men. He should lower his head in greeting if she doesn’t. Since the left hand is seen as impure, you should always extend your greetings with your right. Moroccans changed their salutations during the period of coronavirus pandemic, and now they are a little afraid of chacking their hands.

When visiting Morocco, you shouldn’t dress seductively because that will let you look attractive to others. Men should dress in long pants or shorts that reach the knee and a t-shirt or collared shirt that covers their shoulders. Women should dress modestly and cover their upper arms, knees, breast, midriff, and back with long, loose-fitting clothing. Visiting a mosque will require you to protect your hair, so bring a scarf for added modesty. Foreign women are not required to do so. It is only appropriate to dress in swimwear at the beach, and you should always wear your clothes before leaving.

It’s crucial to be much more conservative and cover your arms and legs if you’re visiting a rural location. Although there is a little more laxity in the cities, the people there appreciate it if you respect Moroccan tradition by wearing modestly. Bring some comfortable sandals because you’ll be taking them off quite a bit when you enter houses and places of worship.

Keep in mind that you should dress much more conservatively if you are visiting during Ramadan. Also, if you want to eat, drink, and smoke, you should not do it in front of the locals who are fasting throughout this holy month even though you won’t be obliged to fast (just in a manner of respect).

Expressions of affection in public

Although it’s common to see people of the same sex holding hands and hugging each other in Morocco, this is only done out of friendliness. While homosexuality is against the law in Morocco, public demonstrations of affection between people of different sexes, such as kissing, are not permitted.

Avoid using your index finger to motion someone over if you need to beckon them because this is regarded as quite impolite in the culture of Morocco. Instead, incline your palm downward and move your hand in your direction.

Moroccans are renowned for being hospitable, so you may even run into folks who ask you over for lunch. You’ll also have the rare chance to eat in a local family’s home while traveling to Morocco with Trafalgar. What, then, should you understand about the culture of Morocco at home?

Take off your shoes before entering as a first step. You can go barefoot or your host will provide you with indoor slippers. Before receiving tea, coffee, and sweets from your host, it is customary to engage in conversation with them. Another Moroccan custom is to provide a gift, such as tea or pastries, for the host.

You should always wash your hands before eating. Before the dinner is served, your host may bring a washing basin to the table. Don’t dive in though just yet! Before the host blesses the dish and says “bismillah,” which is Arabic for “in the name of God,” you shouldn’t begin to eat. Always remember to use your right hand for eating once the feast has begun.

Although Moroccans frequently eat with their hands rather than a knife and fork, there is a trick to it. Your thumb should be used as a scoop as you hold the bread between your fingers. With a little practice, you’ll quickly become an expert! the cuisine of Moroccan is delectable, so it can be tempting to sample everything on the menu.

Customs of Morocco about tipping

In Morocco, it is traditional to tip waiters, porters, taxi drivers, hotel workers, and other service personnel. It’s customary to tip between 10% and 15%, and it’s recommended.

The craft of bartering

Souks of Moroccan, or traditional markets, are renowned for their colorful selection of things they sell, which range from spices and tea to lanterns, leather goods, and apparel. In these charming locations, it’s difficult to avoid stocking up on souvenirs, so you’ll need to master the skill of bartering. The majority of Moroccans bargain when purchasing everything from food to carpets because it is a large part of their culture.

Generally speaking, you should never pay more than 70% of the inflated starting price, and your initial offer should be about 50% less than the price being requested. You are under no obligation to purchase anything and are free to leave if the dealer doesn’t present you with a fair deal. But also keep in mind to be courteous and cordial, and avoid taking

Don’t be critical of the monarchy in Morocco

Due to Morocco’s lèse-majesté laws, disparaging the country’s king and the royal family with words or deeds is forbidden. Keep your royal sentiments to yourself in Morocco because it is against the law to deface the king’s image and breaching these laws could result in jail time.

Criticizing Islam is also strictly forbidden. The majority of Moroccans—more than 99%—practice Islam, which is the country’s dominant religion. You run the danger of insulting the locals if you disrespect Islam in this area, thus no visitor should intentionally be impolite to their host. Asking inquiries in an effort to understand the faith better is OK, but you should refrain from expressing any strong sentiments that can enrage the locals.

Also keep in mind that non-Muslims are not allowed in mosques, cemeteries, or koubas, among other places (tombs of marabouts or local saints). Even if a mosque is nearby, you should always be respectful and avoid approaching too closely or peeping inside, especially if you’re taking a picture.

In such a beautiful place, it can be difficult to avoid snapping hundreds of pictures every day, but it’s crucial to remember to show some courtesy to the people. Asking permission before taking a photo is always advisable in Morocco because most people don’t like it.

Remember to inquire about the price before clicking away if you’re at Marrakesh’s famous Jemaa el-Fna square, where you’ll need to pay to take pictures of all the incredible dancers, artists, and performers there. Additionally, you should be aware that taking pictures of buildings, police, military, and border checkpoints are prohibited in Morocco.

In the end, we would like to know what you really liked about the culture of Morocco.